Proview’s CE/TV division is putting a new face on its fledgling U.S. CE marketing venture by dropping its former Moxell name and ramping up its lines of CRT, LCD and plasma TVs for key regional dealers.

Shortly before International CES in Las Vegas, the company lost its highly visible sales and marketing leader, Rick Calaaci, following a decision to discontinue plans to introduce CE products under the Motorola brand.

Amkreutz said the new Proview CE division decided to deliberately align itself behind its corporate parent, Proview International Holdings, a Hong Kong-based manufacturer of primarily IT-based components that saw $1.75 billion in gross revenue last year. The company has key manufacturing operations in five locations around the world, and has dedicated a team of 50 engineers to the task of developing CE-oriented products — primarily television displays.

Using the Proview and MAG Innovisions brands, the new CE supplier continued to focus on regional CE retailers, offering opening-price-point products and programs that were not readily available through other third-tier CE vendors now trying to gain a foothold in the U.S. market.

“Our approach is that we want to start small,” Amkreutz said. “We don’t want to dump 100,000 units into Best Buy and then alienate everyone else around us. We are going to start with smaller regional players, offer programs for the buying groups like MARTA, Nationwide and NATM, and very slowly build the Proview brand into the top tier-three company in the country.”

He said Proview’s key advantage is its 10-year history selling IT products in the United States. In that time the company has established service and call centers in Houston and Garden Grove, Calif., and placed centralized warehouses in Pennsylvania, Kentucky and California.

While under the Moxell name, the company shipped roughly $8 million to $9 million in goods, accounting for 12,000 units across seven models, between October and January. The company focused on such chains as P.C. Richard & Sons, Conn’s and Brandsmart, all of which Amkreutz’s team had worked with in the past through affiliations with Sharp and Toshiba.

Proview will be looking to add new regional chains this year by being “a partner in the opening-price-point category in the market that has a back end in terms of service, warranty and logistics, that can ship when we say we can ship, and can promise a consistently high quality level,” Amkreutz said.

In 2005, the company will expand its plasma and LCD TVs, offering screen sizes ranging from 14 inches to 50W inches, and will sell a broad line of Proview CRT TV sets to fill demand as other brands exit the category, Amkreutz said.

Starting in June, Amkreutz said Proview will transition the plasma line to include ATSC tuning in all models 37W-inches and up.

In LCD-TV the company will offer Proview models in an expanded range of screen sizes, and will introduce its new step-up GL line.

Proview will launch its first line of direct-view CRT-based televisions, to help fill the void left by manufacturers that are scaling back assortments or dropping out of the market altogether.

Beginning in early 2005, the company will offer 10 Proview CRT models, with a mixture of analog and digital models, featuring either curved or flat-glass screens. 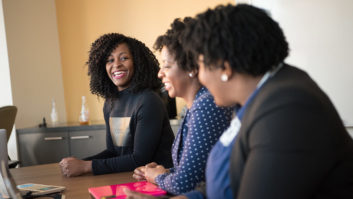