Mahway, N.J. – Boston Acoustics will
get a promotional boost and and expanded customer base from its just announced partnership
with

it is embedding the audio supplier’s soundbar technology into a
series of Nvelop credenzas for flat-panel TVs.

Four Nvelop credenzas priced from a
suggested $1,499 to $1,999 will be sold only through Bassett’s distribution
channels. Floor samples are already shipping to Bassett-branded furniture
stores and to other furniture retailers.

Boston’s name appears on the grill
of each embedded soundbar solution, which delivers simulated surround sound and
includes a separate downfiring subwoofer hidden inside.

In promoting the credenzas, Bassett
will include the Boston Acoustics name in advertising to bring credibility to
the audio solution, said Bassett retail marketing director Pete Morrison. Bassett
will launch a series of ads starting Memorial Day weekend in the Wall Street
Journal and provide ROP ads to retail stores. The credenzas will also be
advertised in direct mail, web ads and on Bassett’s web site, which will sell
the credenzas for fulfillment by local dealers.

Bassett’s web site will let
consumers rotate pictures of the credenzas by 360 degrees and simulate the
difference in sound quality between TV speakers and the Boston Acoustics
soundbar embedded in the credenzas.

To support sellthrough, Bassett offers
an A/B switch with a big green button to switch between the embedded Boston
Acoustics soundbar and TV speakers through which a DVD demo disc will play. Bassett
is requiring retailers to hook up at least one switch, which is made by Audio
Authority. Dealers who display four credenzas get a free switch.

The consumers who will get the demo
will represent “a host of new customers exposed to Boston Acoustics,” said Eli
Harary, Boston’s senior VP of global brand management. The Bassett channel
delivers customers that Boston doesn’t get through its traditional CE channels,
he noted.

Bassett customers, said Morrison,
are interested in decorating, and “we are about decorating.” The credenzas
“combine the beauty of furniture and the beauty of Boston Acoustics” without
wiring up speakers that “detract from the beauty of the decor,” he said.

Harary called the products the “only
furniture-centric products with high-quality audio built in.”

Past attempts by consumer electronics
suppliers to sell through furniture stores have not been successful because
people don’t go to furniture stores to buy electronics, he said. “That’s like
selling lawn mowers in a Mercedes store.” What’s different about the Bassett
strategy, he said, is that customers are coming to the store to buy a TV
credenza, and salespeople can then subtly point out that the credenza solves an
additional problem.

Bassett’s sales channels consist of
about 100 Bassett-branded stores nationwide, half owned by Bassett and the
other half owned by licensees. In markets that lack Bassett-branded stores,
Bassett also sells through around 120 other furniture stores that have made a
sizable commitment to displaying Bassett products. Products are also available
through select interior designers. 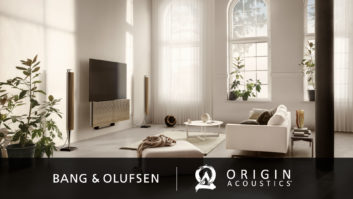