The $149-suggested dock is due in October with die-cast zinc construction. Although details on its cable connection to the HTiBs were unavailable, the dock enables the HTiBs’ remotes to navigate an iPod’s audio and video content via an on-screen display or on the iPod’s own display. Nine iPod adapters are included. The device also recharges iPods. 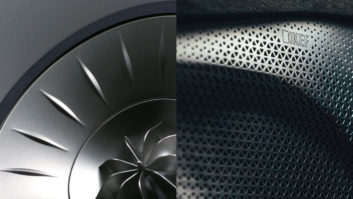