The company said the facility was recently upgraded and equipped
with the latest 3D technological innovations, based on standards developed by
the Blu-ray Disc Association.

The center offers studios and filmmakers Blu-ray 3D image
processing, interactive programming, as well as authoring and disc-certification
services, which are capable of making Blu-ray 3D Discs commercially available by
this spring.

The Panasonic Hollywood Laboratory has been working collaboratively
for months with studios and the creative community in Hollywood to conduct Blu-ray 3D encoding and
menu and subtitle-authoring trials.

The efforts have given the advanced authoring center expertise in
guiding and advising companies during the key early planning stages of a
Blu-ray 3D title, Panasonic said.

“Given Panasonic Hollywood Laboratory’s vast experience with HD
image processing, we are confident that we lead the industry with MPEG-4 MVC
(Multiview Video Coding) 3D image compression technology,” said Jeannine
Patton, Panasonic advanced authoring center VP/general manager. “This
laboratory, located as we are in the world’s entertainment capital, is proud to
offer the filmmaking community the industry’s first complete, end-to-end
Blu-ray 3D encoding and authoring facility. Blu-ray 3D is an exciting new space
for the home entertainment industry and our early research and collaboration
was extremely helpful in determining what will provide the most compelling
experience and optimum performance when designing for Blu-ray 3D.” 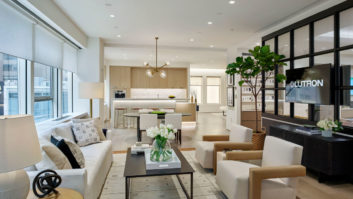