Posted by Stewart Wolpin on July 30, 2008
Sitting proudly in my A/V stack is my first Blue-ray player, the BD-Live

, one of the first Blu-ray Live players available (

on sale as well.)

Posted by Peter Suciu on August 7, 2008
Last week I wrote that multiplayer gaming was suffering because many of the maps aren’t designed for smaller groups of players.

I Know What A Splitter Is

I had a little problem with my Internet connection this morning.

The New 4/3 Digital SLRs — What Does It Mean?
Posted by Greg Scoblete on August 6, 2008
The esteemed Dave Etchells at Imaging-Resource.com has an analysis up on the new Micro 4/3 System we reported on yesterday by Panasonic and Olympus that’s worth a read.

Circuit City Gets Mad
Posted by John Laposky on August 6, 2008
The New York Sun reported that an angry Circuit City exec sent a memo to stores ordering store employees to remove the August issue of Mad Magazine from its shelves after the venerable humor publication ran a parody of the chain’s ad circular, for a chain called Sucker City.

Panasonic Unveils ‘Living In HD’ Part Deux
Posted by Greg Tarr on August 5, 2008
In case you are keeping score, Panasonic reminds us today that its long-running “Living In HD” promotion is still, well, running.

Mr. Baseball
Posted by Doug Olenick on July 31, 2008
Every now and then my job gives me the opportunity to do something that I think even I, a jaded journalist, thinks is really cool.

An ‘Old Timers’ Farewell To Yankee Stadium
Posted by Steve Smith on August 5, 2008
As I’ve said before, cover the consumer electronics industry and see the world.

Are Things as Bad as They Appear?
Posted by Stephen Baker on August 4, 2008
Judging by the drumbeat of depressing economic news, one would think that every retail category and every product was in the throes of a recession.

This One’s For The ‘Salesman’
Willy Loman would have loved this. This week, Slate’s Farhad Manjoo is declaring “The Death of Planned Obsolescence.” 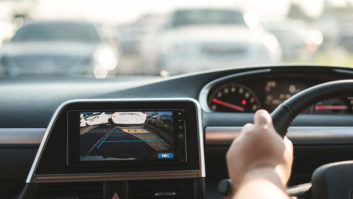 Voice Control Is Taking The Wheel In 12-Volt