A new Neilsen survey revealed Thursday had both good news and bad news for the controversial Feb. 17 transition to all-digital TV broadcasting.

First the good news: The study found the number of homes that are still at-risk of losing television programming if the nation’s analog TV broadcasts were to go dark today has declined by over 1.3 million homes since Nielsen’s last readiness report in December.

The bad news: there are still more than 6.5 million U.S. households — or 5.7 percent of all homes — that still are not prepared for the Feb. 17 analog cutoff.

At this rate there would still be over 5 million homes at risk of losing TV signals of any kind in a little less than a month from now. Ouch!

Because Nielsen has developed samples that reflect the total U.S. population including African-American and Hispanic populations, these household characteristics in the samples can be projected to the whole country, the company said.

“It is imperative that we operate at an accelerated pace to educate those who are at the greatest risk of losing their television service — low-income households, large numbers of senior, minority and disabled viewers,” stated Cynthia Perkins-Roberts of the Nielsen African American Advisory Council. “These viewers rely on traditional television the most and can least afford to lose their television lifelines. We have a responsibility to make sure that these groups whether in our families, churches or communities are equipped and ready for this transition.”

Among the 56 local markets that Nielsen measures with electronic meters across the country, the one that is least ready is Albuquerque-Santa Fe, N.M., with 12.4 percent of the households completely unready. The most prepared market is Hartford and New Haven, Conn., with only 1.8 percent of homes unready.

This will certainly serve more ammunition to legislators sympathetic to President Obama’s call for a delay in the DTV transition. But after all this time and effort in trying to bring these folks to the proverbial DTV water, I have to wonder, will an extra three or four months make a bit of difference? I hope the new administration is this understanding when it comes time to pay my income taxes in April. Now there’s a really confusing mess.

How do you feel? 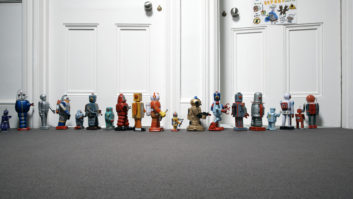